Center for Native Peoples and the Environment 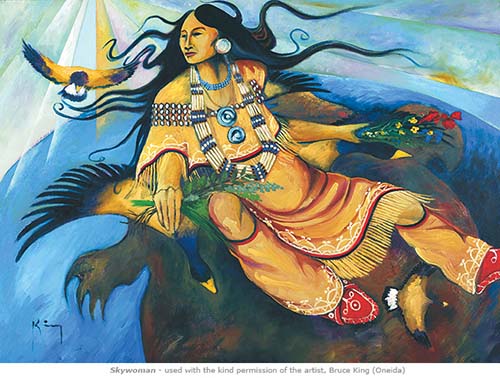 Our region is the home of two great intellectual traditions regarding stewardship of the earth: traditional ecological knowledge of Indigenous People and scientific ecological knowledge. The mission of the SUNY-ESF Center for Native Peoples and the Environment is to create programs that draw on the wisdom of both Indigenous and scientific knowledge in support of our shared goals of environmental sustainability.

In addition to serving as a bridge between traditional ecological knowledge and western scientific approaches, the Center incorporates Indigenous perspectives and knowledge for the benefit of native students and works to educate mainstream students in a cross-cultural context.

ESF is located within the original territory of the Haudenosaunee, or Iroquois, Confederacy. The college's main campus, its Heiberg Forest and its Lafayette Road Experiment Station are all within the Land Rights Action of the Onondaga Nation. The Onondaga Nation maintains its own distinct government, language and customs based on a smaller portion of its original land base located south of Syracuse.

Diversity in the Scientific Community

Solutions to complex ecological problems require not only scientific expertise, but also understanding of the cultural context in which they occur. Cross-cultural competence thus becomes an important component of functioning effectively in the global scientific community. This is particularly true in the environmental disciplines, where science and culture intersect. All over the world, conservation biologists and policy makers are realizing the importance of incorporating local and Indigenous knowledge into conservation efforts. However, such efforts cannot go forward without full and equitable participation by Indigenous people. Native Americans are the most under-represented group in the American scientific community, and are "barely a presence in science" according to a report of the National Science Foundation. A 2018 study found that "Native Americans are underrepresented at almost every point in the academic pipeline." If the valuable contributions of Indigenous thinking are to be incorporated into the realm of environmental problem solving, we must envision ways to increase the participation of native people in the environmental dialogue.

Traditional ecological knowledge (TEK) is increasingly valued by academics, agency scientists and policy makers as a potential source of ideas for emerging models of ecosystem management, conservation biology and ecological restoration. It has been recognized as complementary and equivalent to scientific knowledge. Researchers in pharmaceutical laboratories and in agricultural experiment stations all over the world are beginning to recognize the knowledge of Indigenous peoples in scientific research. New directions in applied biology that have direct parallels and precedents in traditional knowledge include ecosystem management, medicine, agriculture, wildlife and fisheries sciences. Biological research is moving to explore these “new” approaches, yet acknowledgement or understanding of traditional ecological knowledge is rare in the scientific community. A goal of the Center is to work collaboratively to generate strategies for engaging future scientists in these vital new directions in environmental thinking.

Indigenous people are the stewards of fully 4% of the land area of the United States and represent some 700 distinct communities possessing detailed knowledge of the biota of their homelands. Native American land holdings in North America collectively contain more wildlands than all of the National Parks and Nature Conservancy areas in North America. Globally, Indigenous people inhabit areas with some of the highest remaining biodiversity on the planet and are actively being engaged as partners in biodiversity conservation. Issues of sustainable development, resource management and ecological restoration all include Native American stakeholders. Federal agencies are required to consult with tribes on a government-to-government basis on a host of scientific and natural resource policies. Thus, our ESF graduates have a high probability of encountering issues involving Indigenous cultures and TEK.

However, the majority of scientific professionals and educators have little understanding of the value of TEK or its cultural context. Exposure to TEK has a legitimate role in the education of the next generation of biologists, environmental scientists, and natural resource managers. TEK has value not only for the wealth of biological information it contains, but for the cultural framework of respect, reciprocity and responsibility in which it is embedded (Kimmerer 1998, Pierotti and Wildcat 2000). The Center for Native People and the Environment has developed a series of integrated educational offerings that will enrich our curriculum with coursework and allied programs that increase student’s awareness of TEK and Native American perspectives on the environment.

Why include Traditional Ecological Knowledge in ecological education?